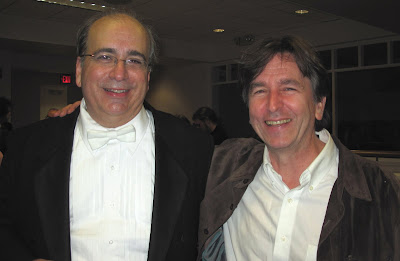 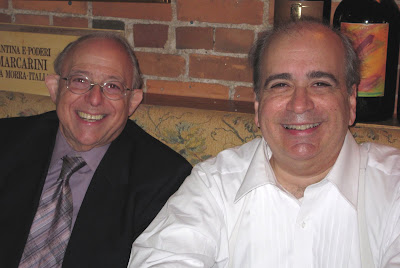 Orchestra New England gave the world premiere of Russo's "Changes" for Septet which he completed recently. The performance took place on April 10 at the United Church on the Green in New Haven, Connecticut. You may hear the computer generated rendition of this new work by clicking where indicated on the blog post below. The sound file of the first live performance of this music will be posted sometime soon.
Note: Joe played the bass part for this performance.
Above are some photos taken in New Haven by Louise Crowley before the world premiere of Russo's "Changes". The top photo is Joe and good friend and Orchestra New England Principal Cellist Tom Bailen. The middle photo is that of Joe (left), Marie Russo (his mother) and his brother and founder and director of rock band camp "Bach to Rock" Michael Russo. And the lower photo is that of Joe and his good friend and science professor at Quinnipiac University Marshall Sternberg.
at April 15, 2010 No comments: